Change: An Analysis of Running Shoes

See what I mean? Long, narrow and with high arches.

Right now, everything that I’m doing running-wise is in the context of my time at the UCSF RunSafe clinic. Last week, I talked about what I’d learned in terms of improving my strength, flexibility and muscular imbalance. Today, we’re going to talk about running shoes, lament the inconsistencies of sizing, and take a look at arch type and pronation.

If you look at my footprint over there on the right, taken as I walked across the room at UCSF, you’ll see that I have a relatively high arch. This should mean that when I run, my foot should naturally roll outward, which would suggest that I would be naturally inclined to under-pronation (this post from Runner’s World gives a decent explanation of pronation types). Instead, I over-pronate and roll my foot inward.

I am, literally, a walking contradiction.

I've spent two years in the most minimal shoe I could find.

For more than two years I’ve been running in the weirdest shoes possible, Saucony Shay XC racing flats. They have no cushioning, zero support and are not the kind of thing that serious distance runners wear. These are the sorts of shoes that normal people would use for a speed workout at the track, but not for a half marathon, yet I wear them for everything from track to trail because they’re cut extremely narrow and are one of the few shoes that I’ve found that actually fit my foot in terms of width. They are not, however, doing my overpronating feet any favors.

Now, while the general rule of thumb is not to fix what isn’t broken, watching myself in slow motion showed me that I really do need a bit more support if I want to avoid injury. My current stride just isn’t sustainable, particularly over long distances.

And so the quest for new shoes began. I started at my local running store, where they’re helpful and knowledgeable, but the fact of the matter is that they seem to equate large feet with a need for massive amounts of cushioning and support. As someone accustomed to running in an ultra-minimal 5 oz shoe, I’m not really interested in migrating to an über-stability 11 oz monster that feels like I’m running with cinderblocks attached to my feet. The modified minimalist shoes that I’m looking for aren’t carried in stock in my size.

Zappos came to my rescue once again. My house may look like a shoe store exploded in my living room, but they have the varieties that I want in the sizes that I need.

I tried a few different models of Asics running shoes, primarily because they’re one of the few brands that are made in narrow widths. Unfortunately, even narrow Asics are still too wide. At my local shoe store, we took a narrow GT-2160 and still had to add in a Superfeet insole to keep my foot from sloshing around. As someone who prefers minimalist structure (or lack thereof), a heavy shoe plus an insole feels as awkward as moon boots.

Mizuno comes in narrow, too. Unfortunately, they were just as wide on me as the Asics had been. Same problems, no resolution.

While they may come in narrow — and a slightly more truly narrow than the Asics or Mizuno shoes that I tried — the New Balance length was consistently a full size smaller (or more!) than expected. For some people, this might not be a problem. When you have a big foot, like I do, scaling up a size just isn’t possible because they don’t make them that large. When a New Balance 12 fits like other brands’ 10.5s, I knew that they weren’t the solution for me.

Since I was already running in Saucony, my UCSF shoe recommendations were all Saucony styles. While these shoes aren’t made in true narrow widths, they felt less wide than any of the supposedly-narrow Asics or Mizuno shoes that I tried. However, the lengths were inconsistent. I ordered three pairs from Zappos, all the same numerical size: my toe touched the end of the Peregrine trail runners; I had slightly more room, but not much, in the Fastwitch; and the Mirage had a full thumb’s width of space between my toe and the end of the shoe. I’m thoroughly baffled.

The Brooks PureProject seemed like my shoe dream come true: an entire collection of minimalist shoes designed with varying degrees of stability. Online reviews showed people talking about how narrow they were. But would they be narrow enough for my feet that are built as long and thin as pencils? I anxiously waited for the UPS truck to arrive (yes, I have gotten many boxes from Zappos lately, Mr. UPS Man; don’t judge me).

The first pair that I tried were the slightly more substantial PureFlow. They weren’t drastically wide, not to short and not too heavy, but they still felt… not right. I was starting to think that maybe, just maybe, there wasn’t a running shoe for me. 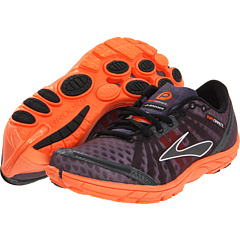 And then I tried on the PureConnect.

It was like I was sliding my feet into a well-worn pair of slippers. My heel was nestled securely. My toes had room to move, but not so much room that I felt like I was wearing flippers.

Only time will tell if they help to compensate for my overpronation, but for right now, at this brilliant, glorious moment, I’m in love.

I tried on 22 pairs of running shoes to write this review. No, I’m not a compensated endorser for any product. No shoe company has ever heard of me, but I’d sure have a lot to say if anyone wanted to listen.