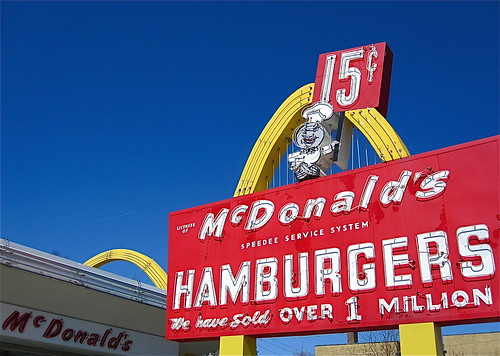 Today we have a question about eating habits.

Do you eat fast food?

Yes, I do eat fast food, which I admitted in this discussion of the price fallacy of home cooked vs. fast food. I’m a big fan of In-N-Out burger here in California, and I don’t hesitate to patronize my favorite cheesesteak shop when I go back home to Philadelphia.

But I don’t eat McDonald’s.

I haven’t had a burger at McDonald’s since April of 2005. It didn’t start as a matter-of-principle sort of thing. I’d just noticed that after eating my burger and fries, I always, always craved more junk food throughout the day. God help you if you stood between me and the vending machine in the afternoon, because I would be desperate for a Snickers and Coke. So by the end of the day, I hadn’t just consumed the McDonald’s fat and calories, but also the extra 400-500 in cola and candy.

The funny thing was when I noticed that I didn’t have the same cravings after eating at other fast food places. Pizza didn’t do it. In-N-Out didn’t do it. It was just McDonald’s. So one day I decided to take a break from the golden arches, just for a week. That’s when I realized that all of the related cravings started going away, too.

A month passed. Six months. A year. That’s when I realized that I just didn’t want it anymore, but I never made a big deal about it and honestly, I rarely gave it any thought at all.

Then early in the summer, my husband took the Tiny Kitchen Assistant on the Petco Park behind-the-scenes tour in San Diego. The tour guide was telling the history of the team.

“Do you know who Ray Kroc is?” he asked. TKA shook his head.

“Have you ever been to McDonald’s?” he asked.

The tour guide looked at my husband, incredulous. “What planet are you people from?”

When they related the story to me later that night, I asked TKA about it. “Grandma tried to take me there for breakfast once, but I told her that I’d rather go to Starbucks for a big, cold milk. McDonald’s is junk food.” **

Now, I’ve never told him this. I’ve never forbidden McDonald’s. I fully expect that he’ll go with his friends someday and probably resent me for not taking him myself. I’m pretty sure that I’ve never even told him that I don’t go, or why. So I asked him why he thought that that McDonald’s was somehow different from other options.

“At my preschool, the kids who didn’t eat fruit would come to school with McDonald’s bags. It’s gotta be bad for you.” He’s always been unusually perceptive, but this is probably my favorite observation of all. He just doesn’t identify with the McDonald’s kids.

And of course, his perception just makes it that much easier for me to stay away.

Does anyone else have the powerful junk food cravings after eating McDonald’s or any other form of fast food?

** Yes, I realize that Starbucks isn’t exactly the pinnacle of nutrition, but a leisurely Sunday morning scone and lowfat milk is a different experience than a hastily eaten Big Mac, Coke and fries.