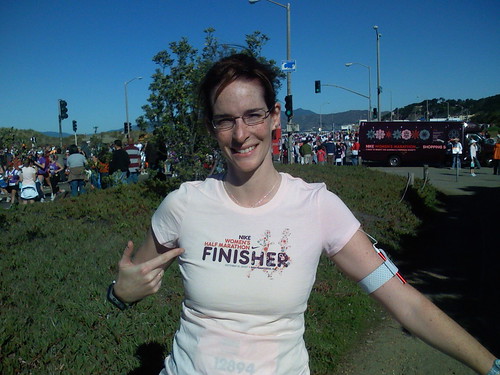 Me, proudly displaying my "Finisher" t-shirt!

I think I was about six years old when I stopped running. Being a type-A overachiever, I didn’t see any reason to continue to do something when I obviously was not the fastest or best at it. My gangly legs just never moved fast enough to keep up with the other kids who just seemed to be built for power and speed. And since elementary school is all about sprinting, it never even occurred to me that distance running was even an option.

In all honesty, I never gave running another thought until I was pregnant. Shortly before I gave birth, I told my husband that if I survived childbirth, I wanted to run a half marathon (I have a flair for melodrama, it seems). Never mind that I hadn’t run since the days of mandatory sprints in high school basketball.

I signed up for the 2007 Nike Women’s Half Marathon when my son was just a few months old. I trained on my own – if you can call my awkward, half-assed attempts at increasing mileage “training” – and completed that half marathon in just under three hours, walking most of the final five miles after developing a blister on my right foot.

Even though I said that I didn’t ever need to do it again, I secretly wanted to. The following year I registered for the 2008 ING Philadelphia Distance Run. Again, I sort of half-assed my training and completed the race in just about the same time as I’d done the Nike the year before. And then I drove to my Nana’s senior living apartments to throw the 90th birthday party that I’d planned for her; needless to say, I slept well that night.

In the four years that I’ve been doing this, I’ve learned a few interesting things: